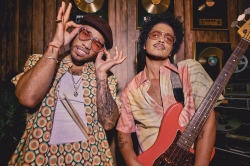 Silk Sonic is an American R&B superduo composed of singer-songwriter Bruno Mars and rapper, drummer, and singer Anderson .Paak. The duo released their debut single, "Leave the Door Open", in March 2021. They later released "Skate" in July 2021, followed by third single, "Smokin Out the Window", and their debut album, An Evening with Silk Sonic in November 2021. The album peaked at number two on the Billboard 200, while the first three singles reached the top twenty on the Billboard Hot 100, with "Leave the Door Open" spending 18 weeks in the top ten and two non-consecutive weeks at the top spot. The song later won four Grammy Awards, including Record of the Year and Song of the Year.

In 2017, Anderson .Paak was the opening act for Bruno Mars on the European leg of the 24K Magic World Tour. In April, Mars and .Paak worked together at Abbey Road Studios in London with Nile Rodgers and Guy Lawrence for Chic's album It's About Time, and worked on music while on tour that appeared on Paak's album Ventura. The duo was formed in 2017 by Mars and .Paak "as a joke the two friends hatched on the road".

On February 26, 2021, Mars announced that he and .Paak had formed a band, saying, "[Silk Sonic] locked in and made an album."In a press release, they said Bootsy Collins named the band after he heard the album. "Leave the Door Open", the band's debut album's lead single, was released on March 5, along with the intro song, hosted by Collins. The band made its television debut at the 63rd Annual Grammy Awards performing the single, alongside a tribute to Little Richard consisting of "Long Tall Sally" and "Good Golly, Miss Molly".

On July 28, Mars announced that Silk Sonic would host a "Summertime Jam" two days later. This event turned out to mark the release of another single, "Skate", which was released on July 30 alongside an accompanying video.

On October 8, Mars's 36th birthday, the band announced that the album's release had been pushed ahead to November 12.

On January 19, 2022, it was announced that the duo will host a residency concert series at the Park MGM in Las Vegas. On February 3, they were announced to also make an appearance in Fortnite. On February 14, the duo released a cover of Con Funk Shun's "Love's Train", which was later released as single in Italy, making it the groups fourth single. On April 21, 2022, Billboard reported that "Love's Train" was the album's fourth single, with no official date of release in the United States.