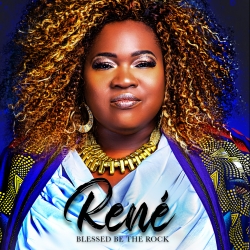 "Blessed Be the Rock"

René (René Bethina Idowu) is an Anointed Power House. PERIODT! Born, René B. Smith, she is a world-traveled performing artist, songwriter, show producer, and entrepreneur. René has been singing since she was a young child at the tender age of five. She has blessed adoring audiences throughout the country and worldwide. The veracity of her praise is based on her guiding scripture Psalm 24:7-10:

As with René’s banner scripture, “gates” on earth have been lifted for her. She is versatile in her singing, performing many genres of music yet, her main love is Gospel. Her musical fluency is attributed to her authentic musical training in the church and formal training at Indiana University of Pennsylvania as a Music Education, major.

Although, René currently lives in Cornelius, North Carolina (Charlotte) she is a proud Trenton, New Jersey native. René founded Youth Turn Musical Performing Arts Company, a summer program that serves and showcases young performers in Trenton, New Jersey. Through Youth Turn, René helps to raise youth’s confidence and academic performance through the performing arts and servant leadership training. She has been working with youth and young adults since her early teenage years. René is also involved in Broadway as a producer and co-producer in several shows such as “The Iceman Cometh” starring Denzel Washington (Tony Nominated 8 Times), “Ain’t Too Proud: The Life And Times Of The Temptations” (Tony Award Winner), “Black Orpheus” (TBA), “American Son” starring Kerry Washington, and “Thoughts Of a Colored Man”.

TODAY, René is spreading her musical wings wider as a recording artist in Gospel Music. Her new hit single, “Blessed Be The Rock”, (Release September 2021) is bound to soar the charts. It speaks to our current times. In a world full of instability, and uncertainty, we have a Rock (Jesus) that will keep us anchored and steadfast. We shall call on the Lord for He is Worthy to be Praised. Not only will this song lift and encourage you. It will have you bopping to its jazzy beat and your ears tingling from its musical expression of praise.