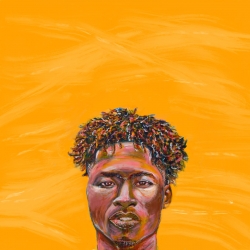 David Debrandon Brown, professionally known as Lucky Daye, is an American singer and songwriter from New Orleans, Louisiana. He is signed to Keep Cool Records and RCA Records. He released his first EP, I on November 9, 2018, and his second EP, II, on February 6, 2019. The EPs were part of a series leading up to his debut studio album Painted, which was released on May 24, 2019.

Daye previously competed on American Idol (Season 4 in 2005), at age 19. He auditioned with "A Change is Gonna Come" by Sam Cooke, and was given four "yes" votes. He was eliminated shortly after reaching the Top 20.

Daye established himself as a songwriter and background vocalist and landed credits in 2008 on songs by Keith Sweat on his album Just Me and Ne-Yo on "She Got Her Own". During this time, he briefly went under the alias of "D. Brown." In 2014, he wrote for Boyz II Men on the song "Believe Us". During 2016 and 2017, he co-wrote songs released by Keke Palmer ("Enemiez"), Ella Mai ("10,000 Hours," "Down"), Trey Songz ("Song Goes Off"), and two tracks from the album Strength of a Woman by Mary J. Blige, among other contemporary R&B artists.

In October 2018, Daye announced that he has signed to Keep Cool Records and RCA Records, and released his first single called "Roll Some Mo". On November 9, he released his first EP titled I, which is part of a series leading up to his forthcoming debut studio album Painted.

On January 17, 2019, Daye released the first single from the second EP in the series called "Karma". On February 6, 2019, he released the second installment of the EP series, II. He is slated to go on tour with Ella Mai beginning in February 2019.  In November 2019, Daye received four nominations at the 62nd Grammy Awards including one for Best R&B Album for his debut Painted. On November 21 2019, Daye opened for R&B singer Khalid on his Free Spirit tour in New Zealand.