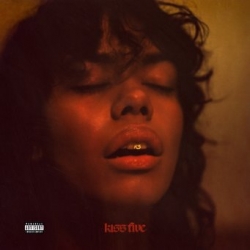 April 24, 2020 – New York, NY – Atlanta-bred hitmaker  K Camp, releases the last installment of his highly anticipated K.I.S.S series today. A decade later, the rapper and seasoned hitmaker continues to make love songs for the ladies, he explains "It's really the last K.I.S.S., so I wanted to fill it with big records that can carry on. If I'm gonna give you the last one, it's gonna be special." The 15-track album includes previously released “Ice Cold,” a track about a blossoming romance and the collab-packed “Black Men Don’t Cheat ft. Ari Lennox, 6LACK and Tink,” which focuses in on infidelity. Although the songs subject matters are on opposite sides of the love spectrum, they’re true to K Camp’s sound, smooth and rhythmic bangers that keeps the listener wanting more.  K.I.S.S. 5 also includes features with Wale, Jacquees, Jeremih and more.

K Camp’s last project, Wayy 2 Kritical, just dropped last year—but he's been up to a lot in between that record and K.I.S.S. 5. He opened up a 5,000 square-foot studio and workspace in Atlanta and signed new artists to his label. He also released "Lottery (Renegade)," which became one of the biggest songs on TikTok with more than 33 million videos posted to it and 6m views. The track gained massive popularity after being used in multiple videos with an accompanying dance on the platform. Since the release it has gone on to amass over 17 million views on YouTube and over 143 million streams globally. The track went viral after influencers and celebrities including Charli D’Amelio, Lizzo, Alex Rodriguez, Ciara, etc. joined in on recreating the dance – it continued to grow when Camp teamed up with the original creator behind the dance craze, Jalaiah Harmon (who shared her story with the New York Times). K Camp also teamed up with fellow Atlanta rapper, Quavo and T Pain for two remixes of the massive song, both garnered recognition from Complex, Uproxx, Hot New Hip Hop and more. A busy year for K Camp, he has established himself as one of Atlanta's most seasoned songwriters and hitmakers—an artist who is constantly reinventing himself and pioneered the melodic rap sound that's all over the world today.