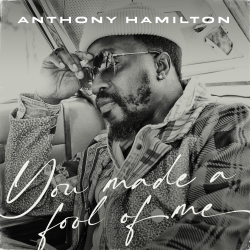 Anthony Cornelius Hamilton is an American singer, songwriter, and record producer who rose to fame with his platinum-selling second studio album Comin' from Where I'm From (2003), which featured the title track single "Comin' from Where I'm From" and the follow-up "Charlene". Nominated for 17 Grammy Awards, he is also known for the song "Freedom" from the soundtrack album of Django Unchained co-written and sung as a duo with indie soul singer Elayna Boynton.

Hamilton was featured on Jadakiss' 2004 hit "Why" (which was nominated for the "Best Rap/Song Collaboration" Grammy in 2005) and two of 2Pac's remixed songs. Hamilton contributed to 2002's "Thugz Mansion" (7" remix) and 2006's "Dear Mama" (Frank Nitty Remix). Hamilton's first compilation album, Soulife, was composed of songs recorded during the early part of his career. These previous works were released in June 2005. Ain't Nobody Worryin', his gold-selling third studio album, was released on December 13, 2005.

Hamilton was featured on a track from The RH Factor's 2003 album Hard Groove called "Kwah/Home". He appeared on Angie Stone's "Stay For A While" in 2004. He made a guest appearance on blues singer-guitarist Buddy Guy's 2005 album Bring 'Em In, contributing vocals to a cover version of Bob Dylan's 1969 "Lay Lady Lay," which featured Robert Randolph.

At the 2006 BET Awards, Hamilton won the BET J "Cool Like That" Award. Comedian Dave Chappelle had Hamilton as a musical guest on his show Chappelle's Show in episode 6, Season 2 that premiered on Comedy Central. He made a guest appearance on the UPN show All of Us in Season 2. Hamilton made a cameo as a soul singer in the film American Gangster, to whose soundtrack he contributed. During the 2008 BET Awards, Hamilton performed Al Green's "Tired of Being Alone" during a tribute to Green's career. Later in 2008, he was featured on The Recession the certified Gold selling album by Young Jeezy.

In July 2011, Jill Scott released her hit single "So In Love" featuring Hamilton. The track spent 19 weeks at the number one spot on the Urban AC charts.

2012 found Hamilton on two successful Def Jam releases: Big K.R.I.T.'s Live from the Underground and Life Is Good by Nas, which debuted at #1 on Billboard 200. Later on in 2012 Hamilton was featured on the soundtrack to Quentin Tarantino's Django Unchained in the track "Freedom" in a duo with indie soul singer Elayna Boynton. British DJ Ben Pearce sampled vocals from Hamilton's song, "Cornbread, Fish & Collard Greens" in his 2013 song, "What I Might Do". In 2015, Hamilton made a guest appearance on the song "That One", the first single from Teedra Moses' second album Cognac & Conversation.

Further demonstrating his diversity, Hamilton made a cameo appearance on the hit Fox show, EMPIRE, where he performed "Point of It All" as part of main character Luscious Lyon's proposal to his girlfriend. The episode aired February 4, 2015.

On February 24, 2016, Hamilton performed at the last "In Performance at the White House" hosted by President Barack Obama and First Lady Michelle as part of a tribute to iconic singer Ray Charles. On March 25, he released his 9th studio album "What I'm Feelin", which he describes as an "emotional" cleanse reflecting on some of the hurdles he has faced. Hamilton partnered with Cracker Barrel Old Country Store to release a deluxe version of the album sold online and in stores across the country. On March 28, 2016 Hamilton performed on NPR's critically acclaimed Tiny Desk Concerts where he performed his new single "Amen," "Best of Me," "Cool," and "Charlene." Chris Brown recruited Hamilton to perform on the "Legends" remix to his hit single "Back to Sleep," which was released on April 10, 2016. On April 21st, Hamilton embarked on a nationwide tour with Fantasia.

Hamilton was featured on the track "Carnival" from virtual band Gorillaz' 2017 album Humanz.

On May 15, 2020, Hamilton released his single "Back Together" featuring the late Rick James via his new imprint My Music Box, in partnership with BMG. The song was co-written by Hamilton and Ed D. Kane, and produced by 9th Wonder. It is the first single off his new album that will release in summer 2020.